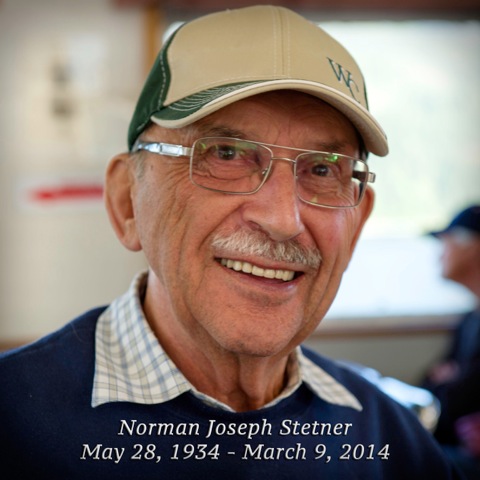 Norman, loving husband, father and grandfather, passed away at home at the age of 79 with Cecilia by his side, eight months after being diagnosed with lung cancer. He was the first of four sons born to Anton “Tony” and Mary Stetner. Norman was predeceased by his parents, Anton in 1999 and Mary (nee Lutz) Stetner in 2005; as well as sister-in-law Lorna Stetner in 2004. He will be greatly missed by Cecilia (Woldrich) his wife of 59 years; their children, Anton (Audrey) of Cumberland BC, grandson Mark: Michelle (Wayne) Kirby of Regina and grandsons Justin (Kristine) of Bangkok, Thailand and Neil of Regina: and Douglas (Nell) of Brisbane, Australia; brothers, Gerald (Emily) of Qualicum Beach, BC; Donald (Eadie) of Regina and nieces, Lindsay (Kristian) and Lesley (Nathan) of Regina; Robert (Marlene) and nephews, Sean (Brigette), and Jason of Regina.

Norman married his high school sweetheart Cecilia in 1955. As a young husband and father he enjoyed serving in the Naval Reserve. Norman was an electrical contractor and president of Stetner Electric Ltd. until 1992, having taken over the family business with his brother Robert. He was involved in both the Electrical Contractors Association of Saskatchewan and the Regina Electrical Contractors Association. Before and after he retired his many hobbies and passions were citizen’s band radio (CB Club) and amateur radio (HAM operators), spending time at the cottage, genealogy, travel, photography and always finding time for his grandsons. Funeral Service will be held in the Recreation Hall at Trinity Lutheran Church, 1909 Ottawa Street, Regina, SK on Wednesday, March 19, 2014 at 1:00 p.m. Interment will be held at a later date. In lieu of flowers, please send donations in Norman’s memory to the Saskatchewan Genealogy Society, Box 1894, Regina, SK, S4P 3E1.

This entry was posted in Family, General. Bookmark the permalink.